What a brilliant idea this expert chef had with his mouthwatering glazed waffle doughnut recipe.!

So, if  you are searching for a new meal idea for breakfast or brunch, you’ll love this video by this American, celebrity chef.

After watching this video, you’ll want more of his delectable recipes.

And, you may want to take a visit to one of his top restaurants and thank him personally for sharing his glazed doughnut waffle recipe.

By the way, I included the video transcript in case you would rather read than watch. Go below to see it… 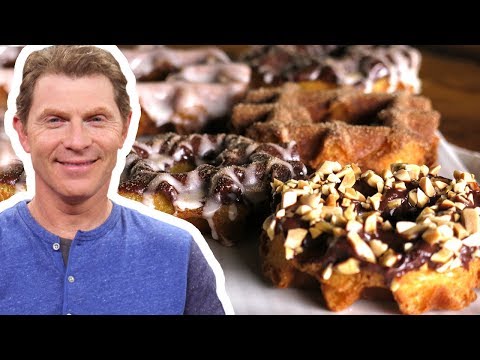 All together, I’m gonna make a waffle and we’re gonna fry it. Then, we’re gonna glaze it with all kinds of cool stuff.

Whisk a couple of eggs and a couple of tablespoons of sugar together. Add some sour cream, which will add a little bit of tangy flavor.

The sour cream also ensures that we have some moisture inside of the waffle. Stir in a little bit of vanilla and a cup of milk

Now, I add the melted butter after adding the wet ingredients to the dry ingredients.

You know, as usual with any of these batters, you want to mix until the the dry ingredients are incorporated with the wet ingredients.

And, not until all the lumps are out, which is the kind of mistake that people make. They feel like they have to get all the lumps out but the lumps will cook out in the waffle iron.

Next, add five tablespoons of butter which is a pretty standard waffle batter. You don’t see the sour cream in a lot of batters,

But, they almost always finish with unsalted butter.

Now, we will let our waffle batter rest for about 30 minutes and we’re gonna make a chocolate ganache which is basically equal parts chocolate.

Now, you have chocolate ganache, one of life’s great things. We’re just gonna let the heavy cream in the chocolate kind of melt together.

At some point we’ll just stir it together and have a beautiful chocolate ganache.

Up Next – Vanilla Glaze!

We’re also gonna make a vanilla glaze out of confectioner sugar, a little bit of milk, and some vanilla.

I’m gonna use about a cup of confectioner’s sugar since I like glazes on my donuts. So this is totally right up my alley but never glazed chocolate, glazed pistachio, glazed coconut.

The reason I want to go slow is because it gets pretty moist quickly and I don’t want it to be too thin.

I’m just gonna put a touch more milk in here. So, today the idea is you know taking a waffle and turning it into a doughnut combining two of our favorite pastries and making one.

It’s like lunch and breakfast brunch cinnamon sugar. Okay you can do this recipe for sure with cinnamon and sugar.

Let’s get these waffles going. We got the all the glazes and all the garnishes ready for our donuts, now all we have to do is make our waffle to make a donut.

I know it sounds kind of crazy but it’s all about waffles going wild. Once we come back, hopefully these waffles will be cooked beautifully, then we’re gonna cut them out and make them look like a doughnut.

And, we will actually garnish them like a doughnut with chocolate cinnamon sugar and a little vanilla glaze.

Important
This site makes use of cookies which may contain tracking information about visitors. By continuing to browse this site you agree to our use of cookies.