Do you consider yourself an expert in the kitchen? Or,maybe at times, an amateur?

Perhaps, you are tired of going through your recipes or maybe you are just in the mood for a new meal idea to prepare for dinner tonight.

But, did you know that one of the best things about cooking, is that whether you are a seasoned cook or novice, you can benefit from other people’s recipes and great cooking tips.

So, watch this video by Ree, the Pioneer Woman, as found on Food Network,to find out how she makes her chicken spaghetti. You will be very satisfied with yourself when you taste this delicious chicken spaghetti even though it was someone else’s idea.

By the way, I included the video transcript in case you would rather read than watch. Go below to see it… 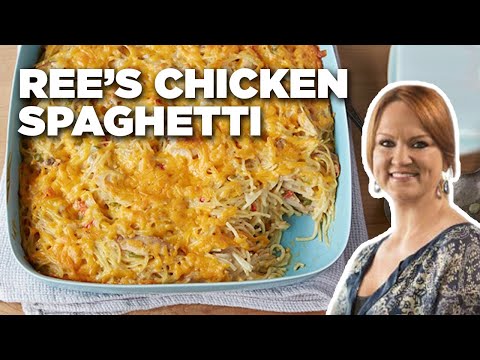 Your video transcript: Your family will love Ree’s Chicken Spaghetti as much as her family does.

And, it’s my husband’s favorite, my kids favorite, so it’s gonna work out well for me

Preparing the Chicken In The Pot

I start chicken spaghetti by boiling a chicken.

I just put a whole cut-up chicken in a pot, brought it to a boil, then reduce the heat, and simmer it for 25 minutes.

Now, the chicken is really tender, its falling off the bone, so I’ll let that cool for a second.

I’ll need some chicken broth, so I just used the broth that was created by cooking the chicken.

This is such a simple dish and one of the things that makes this casserole so great is that it’s easy to eat.

And, part of the reason for that is, I break the spaghetti into pieces.  So, I just do it right over the pot and I cook the spaghetti right in the broth that I cooked the chicken in, so it gives the spaghetti great flavor.

This is about a pound of spaghetti pieces .Okay, now while the spaghetti is cooking, I’ll get the chicken ready.

It’s cool enough to handle so I’m just gonna hold it over the bowl that I’ll mix the casserole in, take off the skin as I go.

Then, I’m just grabbing the chicken and shredding it with my fingers. I’ve got a diced onion and diced green and red bell pepper.

Ingredients For Adding Flavor! to Food!

Now most of this casserole recipe is from scratch, but there’s one ingredient I just can’t reproduce, and that’s canned cream of mushroom soup.

So I’ll just go ahead and add in the salt and pepper and then I add just a little bit of seasoned salt.

It gives it some great flavor, just about a half a teaspoon or so.

Now this is also optional, but I like to give the chicken spaghetti a little kick.

So I add some cayenne pepper, just probably four or five little sprinkles. Now I’ll just give this a stir.

I think the spaghetti should be ready by now, so I’ll just make it easy and just pull it right out to save myself a long trip to the sink to drain this stuff.

Got the spaghetti in there, so I’ll just give it a stir, start introducing all the ingredients, then the broth goes in.

I’ll start with about a cup of the broth that I reserved and then at the very end I’ll check and see what the consistency is like and I can always splash in more.

Now, I’m gonna grate some cheese. I use sharp cheddar cheese because it’s particularly delicious in this casserole when it all melts.

I’ll just throw two cups right into the bowl with the spaghetti mixture. Now, this is where I check the consistency and it does look like it needs a little more liquid.

Because it’s baking in the oven, you want it to be a little bit liquidy when it goes in.

Then it won’t get thick and gloopy. Okay, now I’ll just pour it into a casserole dish, scrape all that yummyness in there, and then I have more cheese left it  just goes over the top.

If this casserole is wrong I don’t want to be right. Alright, now this just needs to go into a 350 degree oven for about 35 or 40 minutes.

Wait! Don’t Go Yet, Experience The Joy of Cooking Right In Your Inbox!

Before you leave, be sure and get my  free newsletter with cool recipes, cooking tips & more to satisfy your family’s hunger pains..

To make sure it’s still open, check below…

==> Go here to get my “Jean Cooks” free newsletter here.

Did You Enjoy This Chicken Spaghetti Recipe? Then You’re Going to Love Ron Douglas…

Ron Douglas has made visiting restaurants his life’s work.

So, you can now get his secret restaurant style recipes all in one amazing book.

So, if you want to learn his unique cooking tips and recipes to help you become an expert chef in your own kitchen — get the book at a discount here (limited time).